The proof is in our products, and to learn more about them, here’s what our customers, food critics and travel guides say about why Mitchells Ice Cream has become a San Francisco landmark! 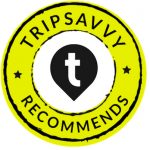 Mitchell’s is a San Francisco institution, first opened in 1953 and earning praises ever since. Still family owned, their flagship Mission-based shop serves up all 40 of Mitchell’s flavors daily, including their selection of tropical flavors made with fruits imported from the Philippines—an ode to the surrounding neighborhood. Mitchell’s was the first ice cream place in the Bay Area to offer mango ice cream and the flavor remains their best seller, though other popular ‘exotics’ include ube and coconut pineapple. The ordering system is easy: just grab a number, wait for it to be called, and then sample as many flavors as you like before choosing. Other delicious flavors include Grasshopper Pie and dulce de leche. 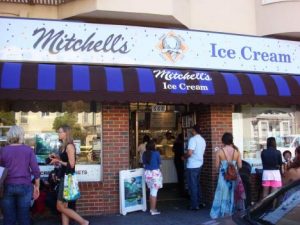 San Francisco is a pretty serious ice cream town. With its proximity to incredible dairy, access to wonderful locally made chocolate, and a city=wide penchant for unique ingredients how could it be otherwise?

Over the years, even long-running ice cream makers like Mitchell’s have gravitated toward flavors well beyond simple vanilla and strawberry, and their new flavors have become the calling cards for a new breed of ice cream shop. In this list, Mitchell’s is proud to be a part of what makes San Francisco unique.

Take a number, deli-style, and be prepared to wait at peak hours: That’s the Mitchell’s tradition, and for many at this 1953-founded shop, it also involves bright purple Ube ice cream. Ube, imported from the Philippines and blended into a rich but not too sweet ice cream, is now a Mitchell’s classic.

Mitchell’s has gone well beyond the standard American flavors of its early years to add Filipino influences and ingredients (Halo Halo is another specialty as well as two coconut options). Mitchell’s is also known for its authentic Mexican Horchata, Mexican chocolate, and Peruvian Yucuma.

VIA Taps Mitchell’s As One Of The Best “Fog City Flavors”
Sourdough bread, dim sum, burritos and ice cream…..San Francisco may be small, but it’s a culinary giant. Here’s what Josh Jens, restaurant critic for San Francisco magazine and author of the “Fog City Flavors” article in VIA Magazine, the American Automobile Association’s magazine about the West, says about Mitchell’s Ice Cream:

“From avocado to vanilla, the flavors range from everyday to exotic. My recommendation? Get the Ube (purple yam) which is lush, unexpected, and delightful—about as San Francisco as San Francisco gets.” 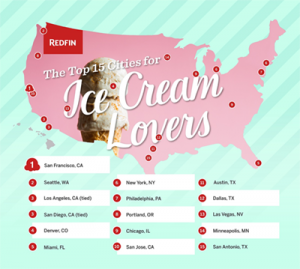 San Francisco rated #1 when Redfin researched which cities have the best ingredients to satisfy ice cream lovers across America. Mitchell’s Ice Cream was rated first in the list of six mentioned by Redfin. In all there are 61 ice cream shops in San Francisco, making this a great honor for Mitchell’s! 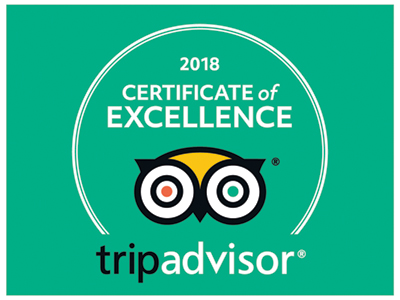 Mitchell’s Ice Cream Featured As One Of The Best On Wayfair.com 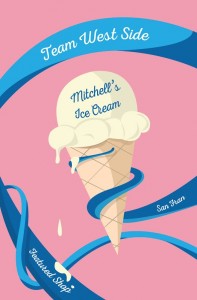 “Every Day is Ice Cream Day” featured Mitchell’s Ice Cream in it’s summary of the best ice cream in the nation. Mitchell’s was listed in the Team West Side section. 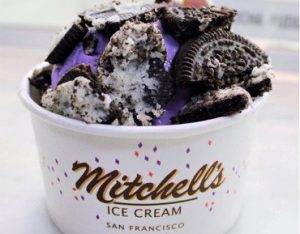 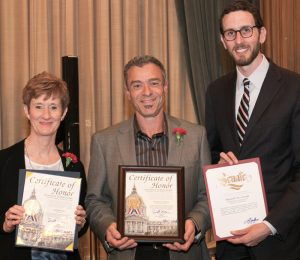 The San Francisco Small Business Commission, the Mayor and the San Francisco Board of Supervisors honor and recognize an exceptional small business from each of San Francisco’s 11 districts each year. Linda Mitchell and Brian Mitchell happily accepted the award on behalf of Mitchell’s Ice Cream in 2016 from District 8 Supervisor Scott Wiener. 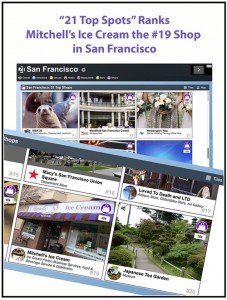 “21TopSpots” uses Facebook statistics, Google ranks, reviews and some magic to rank the best spots for over 100 cities in the world. For San Francisco Mitchell’s Ice Cream ranks as one of the top shops in San Francisco on the list of 21 top shops—THANKS to our many customers and fans!

Zagat Gives High Praise to Mitchell’s Ice Cream
“What an ice cream parlor should be” is how fans describe this “old-school”, family-run Mission “institution” cranking out an “absolutely fabulous” array of “super-rich” and “innovative” “seasonal flavors” (think purple yam or avocado) right “on the premises”, and offering them by the scoop and in sundaes and shakes; yes, it’s relatively “expensive” and “always busy regardless of the weather”, but the “line moves quickly” and the “friendly” crew “provides tastes”, while prepacked half gallons keep “locals buying by the tub.”

Mitchell’s ranks number 3, and Zagat says:
“Since 1953, Mitchell’s has been drawing the crowds to the Outer Mission for its classic, housemade ice cream — and its still one of our great food lover’s treasures.”
See Zagat’s “Must Order” and “Go Crazy” flavor listings.

In honor of National Ice Cream Month in July, the magazine asked its Twitter followers for their favorite ice cream shops around the world. Mitchell’s was one of 14 “bests” featured on the “Traveler” site.

One of Mitchell’s fans wrote: “Mitchell’s: Mission District SF. Love that any homemade flavor can B dipped. Worth the wait: a foodie pleasure.” – @goodnewsmuse

Thanks @goodnewsmuse. Stop by for a “dip”.

30 Things To Love About San Francisco 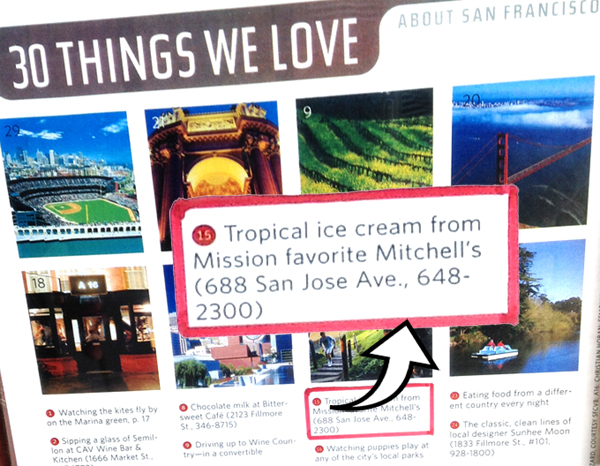 SF Chronicle Columnist Grateful For Mitchell’s
(October 27, 2013)
San Francisco Chronicle columnist, Leah Garchik, listed 5 things she’d rather not have seen, but followed up quickly with 5 things “I am grateful that mine eyes have seen.”

In that listing, she writes: “The counter at Mitchell’s ice cream on a hot afternoon.”

Mitchell’s Rocks
From SFGate’s “Scoop On Bay Area’s Best”
“Not only did this San Francisco stalwart have the best chocolate of the bunch, it also had the highest average score of all the ice cream shops we compared.”

We tasted their chocolate; their best-selling Halo Halo, a tropical blend including purple yam, jackfruit and pineapple; and their Macapuno, or sweetened coconut. And we fawned over them all.

“Great texture,” “love how creamy it is!” our staffers exclaimed. Of the two fruit flavors: “Takes me back to the islands.”

Manager Linda Mitchell believes it’s the quality of ingredients. Mitchell’s has stuck with many of its suppliers for more than 60 years, and it puts cream at the top of the list.

The difference? More fat makes for a creamier texture, but also hardens the ice cream because butter freezes into a solid. So a delicate balance needs to be struck with sugar (or alcohol), which acts as a softener because it doesn’t freeze.

Mitchell Flavors Reinvent Ice Cream for San Francisco
From SF Gate’s “Scoops of San Francisco”
“This San Francisco institution, created by brothers Larry and Jack Mitchell, has been located in the same spot since 1953, and the frozen treats are still made in the back. Its offerings have evolved, along with the city’s ethnic base, to include more exotic fruit flavors, such as the Filipino ube (purple yam) and langka (jackfruit) and the maple-like Peruvian lucuma. The store is popular with neighborhood children, parents in tow. The best seller is mango ice cream, while a popular new flavor is Claire’s Pie (named for Larry’s wife, Claire,) made of coffee fudge ice cream, almonds, chocolate chips and graham crackers. Minimal seating is available.” 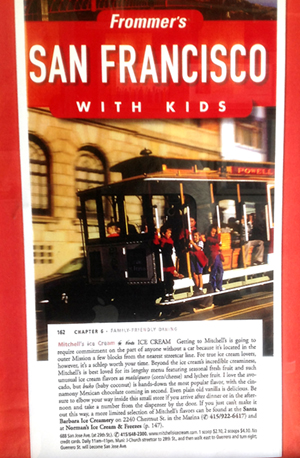 “Be sure to elbow your way inside this small store if you arrive after dinner or in the afternoon!”

Mitchell’s Knows Chocolate
From SFGate’s “Scoop On Bay Area’s Best”
“Although chocolate is a seemingly simple, straightforward flavor, there’s quite a bit of variation in how Bay Area ice cream shops actually make their chocolate ice creams, thanks to the tricky chemistry of freezing chocolate. Mitchell’s, our top scoring chocolate, uses the traditional method, adding cocoa powder to a regular ice cream base.”

Best Ice Cream In San Francisco
From CBS KPIX 5
“Want to escape to the islands for a few minutes? Head on to Mitchell’s Ice Cream where they have been scooping for over 50 years. Tropical flavors are their specialty: mango, baby coconut, and our favorite, ube—a purple yam found in the Philippines. A little nostalgic? Try Grasshopper Pie or Strawberries ‘N Cream on for size.”

Mitchell’s Pumpkin Ice Cream Is Tops
From SFGate Rankings
“Let’s face it—ice cream never goes out of season. Even in the midst of winter chills, we treat ourselves to scoop after scoop—especially during the holidays, when seasonal ice creams join the fray. Flavors like pumpkin and peppermint, available now through the New Year at most markets, add a festive flair to ice cream’s already popular ranks.

So for this week’s Taster’s Choice, we tackled pumpkin ice cream. Of the six varieties we dug into, a familiar local brand had the top scoop.

Mitchell’s ($11.99 for 1/2 gallon at Mollie Stone’s) won our panel over with its “lightly spiced” “pure pumpkin flavor”—a surprise given its dark color. “Looks like coffee ice cream,” one taster described, “but tastes very much like pumpkin.” Add in “good creaminess” and a “light and airy” texture, and all five panelists would buy this brand.”

Over 4,000 Yelpers give Mitchell’s a 4.5 rating and they’ve posted more than 2,800 photos of Mitchell's ice cream on Yelp. See for yourself.